This article is part of the Ellison Center blog Series on Sochi. Click here to read more as we cover the 2014 Winter Olympic Games in Russia!

For several months, countries and groups across the world have condemned the Russian anti-gay “propaganda” laws, a set of ill-defined legal jargon with the ignoble goal of preventing children from being exposed to “non-traditional” sexual relations. For the most part, this means blocking any sort of gay publications, and I doubt we will be seeing an “it gets better” campaign in Russia anytime soon as a result of the law. Most tragically, these laws have lent government support to brutal thugs attacking ostensible pederasts, but most often are just  gay men. People across the world have justly condemned these laws, and President Barack Obama will send noted lesbian tennis player Billy Jean King to represent the US in a not-so-subtle sign of support to Russian gays and condemnation to those who would confuse bigotry with child protection. 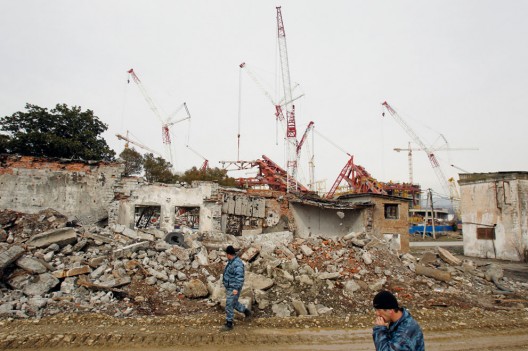 While these efforts are admirable — and the attention is justly deserved — human rights abuses in Russia go beyond these new laws. Visitors to Sochi will not only be exposed to anti-gay legislation, they will be in buildings constructed in brutal labor conditions at the expense of hundreds of workers. Human rights organizations have detailed the myriad ways Russian and even international companies have mistreated and abused migrant and local workers while constructing facilities needed for this international event. In addition to this, the quiet town of Sochi and it surrounding areas have suffered environmental damage as a result of the rapid growth of the Olympic sites. Construction companies have bulldozed over villages and uprooted people’s lives in the rapid effort to build Olympic facilities. As one might expect, these people have been poorly compensated for their forced sacrifices, if at all.

The labor issue has always been a pertinent one in Russia. In this Olympic setting, the abuse of migrant worked takes a hypocritical turn. Though under the purview of this grand competition, designed to unite humanity under the banner of sport, international workers face routine exploitation. Workers from Eastern Europe, Central Asia and elsewhere are required to work long hours — as long as 12 hours in a single shift — for weeks at a time, all the while engaging in back-breaking labor. Sickness, injury, and exhaustion are not excuses for missing work, and workers are fined more for missing a day of labor than they would have been paid. Despite these long hours, pay is irregular, unsatisfactory, and often completely withheld. The employers protect themselves by withholding contracts and even passports from workers, preventing them from understanding their legal rights and arguing for agreed upon pay. Living conditions are poor, with many workers sharing cramped spaces equipped with insufficient showers and toilets. Complaints against these injustices are met with swift retaliation, ranging from further pay deductions to forced deportation. The result is laborers working in poor conditions for unsustainable hours with minimal compensation without guarantee. Laborers report working for months on end, being given only a pittance to provide for basic needs, and at the end of their contract, receiving none of the money their employers promised.

The sports facilities and roads that will house the Sochi Olympics are thus being built by the sweat of exploited laborers. In addition, developers take the land at well below market value from Sochi residents, leaving local inhabitants without homes and not enough money to replace them. Hundreds of Sochi residents have been displaced by the rapid construction, with many left homeless and forced to find new residences unsuitable for their situations.  Developers destroy their homes, then either sell the property at rates much higher than the compensation provided the original residents, or built over the properties to make way for Olympic facilities and roads. Furthermore, the rapid construction has proven a major disturbance in the lives of other residents. It has caused massive traffic delays and sewer buildup. Clogged landfills and cuts to water and electricity service have caused contamination to the water supply. Ecologists warn that the rapid development will pose risks for the local environment, warning especially of the amount of waste the construction generates. Developers themselves are not immune from these circumstances, with some complaining of intimidation and extortion from government officials. It is highly likely this routine corruption fuels the exploitation of laborers and the uprooting of local residents as developers seek to save money after losing much of it to extortion and bribery.

In an ironic twist, all of these abuses are illegal under not only international, but Russian law, as well. Laborers are required to have a 40 hour work week with regular pay and clear contracts, and fair compensation is to be awarded to those whose property is bought for public development. It is quite telling that when Russia proposes an ambiguous bill attacking gay rights, Russian people and migrant workers are not even offered the full protection of the existing laws. To make matters even more twisted, the Sochi Games will be the most expensive Olympiad to date, with a cost of over $50 billion — more than all previous Winter Olympic Games combined.  Evidently, there was not enough room in this budget for their workers. Russia, the Olympics, and the peoples of the world visiting them deserve better than what has been constructed. Despite what sport may be had in Sochi, the development and construction of the Olympic venue has not been a boon to those building it, or those living in its shadow.

Andrew is a REECAS 2014 master’s student.