FROM THE DESK OF THE DIRECTOR

Throughout the year, the Middle East Center has organized or co-sponsored twenty-two public outreach events that helped to promote a deeper understanding of the MENA region’s people, languages, arts, history, politics, and cultures. Among the events that the Middle East Center hosted this year was a fascinating roundtable discussion by faculty experts on the complexities of the Persian Gulf region, organized by Department of History Assistant Professor Arbella Bet-Shlimon.

We have been fortunate to learn about faculty research and scholarship on the region through our yearlong Voices in Middle East Studies lecture series. The Middle East Center has also been able to support faculty development by helping to fund travel to teaching workshops and academic conferences.

This year, the Middle East Center’s mission to support K-12 instruction on and about the Middle East included eleven Bridging Cultures Training Workshops attended by 315 teachers from around the state of Washington. Our faculty affiliate, David Fenner, worked with teachers to strengthen their understandings of the Middle East and to develop strategies to help immigrant students and their parents navigate the American educational system. We also continued our support for Arabic language instruction in the Seattle Public Schools in partnership with the local non-profit OneWorld Now! This collaborative project makes Arabic language acquisition accessible to minority and disadvantaged high school students.

The Middle East Center has further developed its international linkages by partnering with the Department of Civil and Environmental Engineering to cultivate professional exchanges with Jordan University of Science and Technology. We have also launched a new social science exchange program with Qatar University.

Finally, we look forward to seeing many of you at our final lecture of this academic year: The New Arab Wars, a talk by Marc Lynch, Professor of Political Science and International Affairs, George Washington University, on May 25, 7:00 p.m., Thomson 101.

My thanks go to everyone who has contributed to the Middle East Center’s programs and events this year!

NEWS FROM THE CENTER 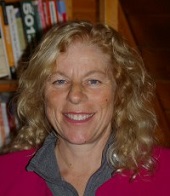 Dr. Paula Holmes-Eber has joined the Middle East Center faculty with an appointment as Affiliate Professor in the Jackson School. During winter quarter she offered a course titled “Women and War in the Middle East.” She has taught at the University of Wisconsin-Milwaukee, and from 2006–15 was Professor of Operational Culture at the Marine Corps University and Center for Advanced Operational Culture, Quantico, VA. In the interview below, she talks about how she entered the field, her future research, and she offers advice to students considering the fields of anthropology and Middle East Studies.

How did you become interested in the field of Anthropology?
My father was a geologist and worked in oil prospecting. So we moved a lot (in fact I lived in 18 houses before I was 18). So I became very comfortable with adapting to new places and countries. My father also loved to frequent archaeological sites. And I remember being fascinated by the ancient Hopi pueblo villages in New Mexico and many of the ruined castles near our home in Market Bosworth, England (site of the War of the Roses). Although I first thought I would go into archaeology, I found my passion was in learning about living people and naturally gravitated to cultural anthropology.

What led you to specialize in the Middle East?
When I was 19, I took a semester to study abroad in Florence Italy. At the time, I held a British passport and so I purchased an Interrail Pass, which was only available to citizens of European countries. Unlike my American friends, the Interrail included travel all over Morocco and Turkey. So of course I had to go! When I got to Morocco I immediately fell in love with the colors and sounds and scents of the country. I decided then and there I wanted to learn more about the country and people and the rest is history.

What research projects do you have on the horizon?

During my years in Washington D.C. I collected over 100 interviews and conducted a survey of 2,500 Marines regarding the cross-cultural challenges they faced in recent operations in Iraq and Afghanistan. I have published a book based on some of this research (Culture in Conflict: Irregular Warfare, Culture Policy and the Marine Corps, Stanford University Press, 2014). However, I have a huge backlog of materials I would still like to sift through and publish, which will probably take at least a couple more years.

For students considering the field of Anthropology or Middle East Studies, what is your advice?
When I was writing my dissertation in the 1990s on women’s social networks in Tunisia, my mother was desperately worried. I was studying a discipline she had never heard of and doing research on a country she couldn’t even find on a map. She was certain I would starve to death. As it turned out, my research and work has been extremely relevant over the past two decades—especially since Tunisia’s Jasmine Revolution and the Arab Spring. For the past eight years I have barely had time to sleep as I worked in D.C. to help our government understand the Middle East and the people there. I have had no lack of work or opportunities. Our country is absolutely desperate for experts on the Middle East—and particularly for scholars who understand the peoples and cultures there (i.e., anthropologists). They are needed at the Department of State (as diplomats) at USAID and in NGOs working in the region and by our policy experts and our military leaders whose decisions literally can save or end many lives. So my advice to students is absolutely study the Middle East. Your understanding of the region is critical to helping solve some of our world’s most pressing conflicts!

The First UW Study Tour to Oman and Qatar 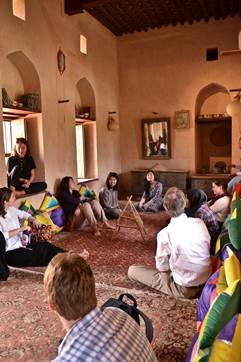 During Spring Break of 2016 the Middle East Center, Jackson School, and the Global Business Center, UW Foster School of Business, organized the UW’s first ever study tour to the Sultanate of Oman and the State of Qatar. The challenges and rewards of this tour were considerable, as a group of eighteen intrepid UW students encountered this critical region for the first time.

The study tour was intended primarily as an optional follow-on opportunity for the students in Professor Kristian Coates Ulrichsen’s Economic & Business Trends in the Middle East course (JSIS 487/587 and I BUS 490), which focused on the Gulf countries and economies. The study tour was also made available to students unable to take the course through a series of content-rich pre-departure orientation sessions, which prepared them for their travel experience.

On the ground in Oman and Qatar visits and lectures focused on the history of the two countries, the production of (and reliance on) oil and natural gas, women’s education and empowerment, public health, water use, economic diversification, state budgeting, guest worker and local labor management, Gulf Cooperation Council relations with post-nuclear deal Iran, Islam, Islamic banking, and Omani family life.

Participants in the study tour were a diverse group, which included undergraduate business majors from the Foster School, Computer Science students, Jackson School students, and graduate students from the Evans School of Public Policy and Governance and undergraduates from the UW-Bothell.

This was a remarkable experience with an as-yet untold impact on the ideas, views, understanding and perhaps future careers of eighteen University of Washington students. There is no doubt that they were exposed to a region—and received a concentrated dose of sensory input, perspectives, articulated values, connectivities and complexities—to an extent that is difficult to deliver in an on-campus course alone.

The study tour was also an introduction to a critical, seldom-visited, strategically and economically significant but all-too-frequently misunderstood region of the world. It was also a welcome development in the growing and fruitful collaboration between the Foster School’s Global Business Center and the Jackson School of International Studies. 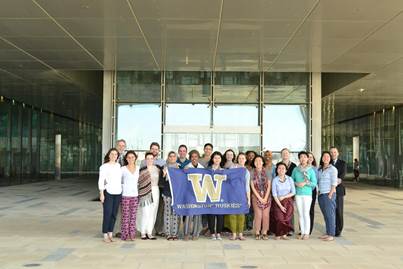 Maral Sahebjame (Arabic). I am a first-year Ph.D. student in the Interdisciplinary Program in Near and Middle Eastern Studies. Through the use of anthropological research methods, my work will examine contemporary urban narratives of marriage in the Islamic Republic of Iran. The FLAS fellowship will facilitate advancing my skills in Persian and Arabic, which will enhance my access to resources that strengthen my ethnographic research.

Michael Sims (Arabic). I am a third-year Ph.D. student in the Interdisciplinary Program in Near and Middle Eastern Studies, researching nationalist discourses among the Syriac Christian and Kurdish communities of Late Ottoman Kurdistan. This project deals with a wide corpus of source material in a number of languages; building a solid foundation of Arabic has made much more fruitful research possible. The FLAS has been profoundly helpful for my studies, enabling me to pursue Arabic language study year round and providing me the free time to conduct my own research. This summer I will again return to Amman, Jordan, where I will continue studying Arabic at the Sijal Institute. 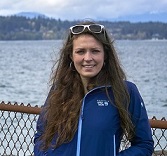 Eileen Sleesman (Turkish). I am a third year sociocultural anthropology Ph.D. student. My research is focused on Christian minorities in Turkey. Presently, I am working with converts to Protestant and Evangelical Christianity with particular attention to the use of communication technologies in community formation, religious training, and proselytization.

Noah Tashbook (Arabic). In the past, I have worked on research relating to language formulation, translation, and machine learning. I hope to continue studying languages as well as work on developing new modes of communication for the modern world while learning more about global communication and relations.

Melinda Cohoon (Arabic). As a Middle East Studies graduate student, I will be working on the topic of interwar Iraq. I am interested in addressing in my MA thesis how the British administered education for the Kurdish population of Iraq during the 1920s, by analyzing the Iraqi Administration reports and Arabic sources. Arabic language skills will give me the tools to analyze primary source documents in the language, which will be integral to the foundation of my current and future research.